I’m so glad to see that Brussels sprouts are starting to regain their street cred lately.  Cooked properly, Brussels sprouts are a complete departure from the realm of vegetables and have an enigmatic savory taste that’s hard to define; the texture is crisp yet sultry; they melt in your mouth leaving scant traces of nuttiness and fresh air.  Cooked improperly, of course, they taste of cat sick.

Avoiding it at all costs (having remembered the horror stories), I never tasted this mini-cabbage until after I left college. Believe it or not, after first tasting them, I thought Brussels sprouts were delicious! What had I been missing out on? Why did everyone complain about these wonderful tasting vegetables and why was it the butt of many jokes in American family sitcoms? I’m not sure, but I think it might have to do with overcooking (which can release noxious smells). Forget the Brussels sprouts of your past and try this fast, simple, and flavorful preparation.

UPDATE:  And as if the good folks at Serious Eats read my mind, here’s another fantastic recipe for Brussels sprouts that was just posted tonight:  Balsamic Glazed Brussels Sprouts.  Yum!

It would seem that I’m not the only one tearing into this poor Chronicle staff writer over his recent article on the “dangers” of salt.  Apparently, Mr. Ackerman borrowed heavily from other sources to write his piece, including a 1997 article from the FDA’s magazine, FDA Consumer.  And here I thought his limited knowledge of the five basic tastes was deplorable.  But there are always new depths to plumb when it comes to the Chronicle…

You can read more about the developing story from my fellow Houston bloggers here:

Salty sourcing from the Chron (HouStoned– The Houston Press)

Last night was a complete 180 from my cookbook recipe adventures of the night before.  I elected instead to make a simple, hearty bolognese from scratch, adding whatever I felt like adding in the process.  The “recipe” began — I believe — as a Giada de Laurentis recipe for marinara sauce, but was heavily altered by my mother and then further altered by me. 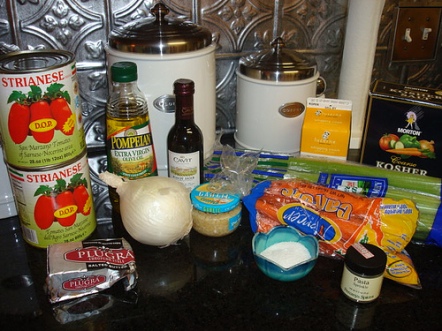 This is probably my favorite dish to cook and for a really weird reason.  And that reason is that I get to chop mounds upon mounds of veggies, which is somehow therapeutic and relaxing for me.  It’s like the same calm that people get from gardening or knitting — I enjoy prepping food.  Maybe I would’ve made a good entremetier in another life.

I don’t normally add meat to the sauce; this was a special request of Richard’s, who wanted “spag bowl,” his weird nomenclature for spaghetti bolognese.  He also calls bœuf bourguignon, “beef boingy-boingy” and — just the other day — I caught him trying to slice off a piece of Grueyere cheese to put on his ham and ketchup sandwich for lunch.  These are just some of the reasons I maintain that I married an eight-year-old in a thirty-two-year-old’s body.

Anyway, the three most imporant things in this sauce are: 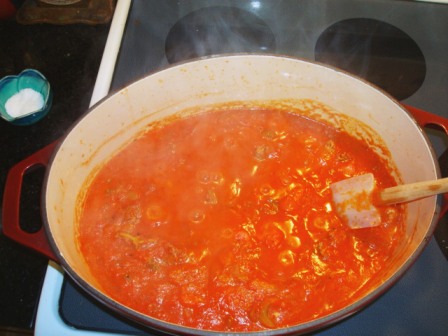 I also added some cooked ground turkey to the sauce after all of the other ingredients had been added and had simmered for a while.  I would have preferred beef or pork, but we figured that since the rest of the dish included enough butter and cream for ten people, perhaps going with a lower-fat meat would even everything out.  The turkey — being rather bland on its own — added nothing in the way of flavor to the sauce, but at least it didn’t detract from it.  And it was nice to have the additional protein and texture.

If you’re going to make this at home, I recommend simmering the entire concoction for at least three hours before serving.  I didn’t have that kind of time last night and was only able to cook it for about an hour, but I’m very much looking forward to the leftovers tonight.  The “recipe” (if you can even call it that) is after the jump.