When my dining companions described China Cottage to me as a “hole in the wall,” two things came to mind:

In answer to my question, their definition was truly spot-on.  China Cottage is, quite literally, a tiny little hole of a place inside a non-descript strip mall off Gessner behind Memorial City Mall.  It contained exactly three booths and two tables, all of which looked to have been originally made for either preschoolers or forest gnomes.  I’m 5’1″, so if something looks small to me, then it’s probably really freaking tiny.

But it was charming; tiny, uncomfortable booths aside.  What astonished me was the incredible breadth of items available on their menu, considering the very small kitchen (75% of which you can see directly from the dining area).  They had Chinese, Thai, and Greek (yes, Greek!) dishes on a menu that unfolded like some sort of complicated set of instructions for a home theater setup.

I’d been told that their pork dumplings were to die for, so I tentatively ordered them (tentatively only because they were listed as an appetizer and I wasn’t sure they’d tide me over for lunch…).  One of my companions took the plunge and ordered a gyro, complete with a side of fried rice.  And another companion followed my lead and ordered the pork dumplings as well.

As we sat and waited on our food, I watched the cooks scurrying around the tiny kitchen with clockwork-like efficiency while the cashier took order after order for delivery or pick-up.  It is a very popular place with the lunchtime crowd at the medical center across the street as well as the giant office buildings a few blocks away.  People in suits and scrubs flew in and out of the door, picking up their food and exchanging a few quick pleasantries before taking off back to their offices.  It was like watching a post-modern ballet of sorts.

Our food made it out in about ten minutes.  The steamed pork dumplings were, as promised, scrumptious.  And there were more than enough to fuel me for the rest of the day.  I could have used a knife, as they were a bit doughy in places, but the filling was so delicious that I ended up abandoning utensils altogether and eating them like finger food.

As for the Greek food, my companion proclaimed it a total success.  He stated that he would never have known it was from a Chinese restaurant; it tasted just like a gyro from Niko Niko’s.  I scowled at him with distaste as he made a giant garbage plate out of his meal by mixing in the fried rice with the tzatziki sauce and onions, and then slathering the mixture on top of the gyro meat.  He seemed to be some strange hybrid of Greek-Chinese heaven, though, and swore to return again for the same concoction.

I plan to visit China Cottage again soon so that I can try some of their Thai menu items and delve a bit deeper into the actual Chinese entrees, instead of just ordering an appetizer and calling it lunch.  And with the almost anachronistically-low prices and proximity to my stomping grounds, it’s a great place to grab a cheap bite of Chinese comfort food.  I think I might leave the Greek food to Niko Niko’s for now, though.

And while we’re on the topic of beverages, the coffee snobs have come crawling out of the internet woodwork over at FARK today after someone made the mistake of innocuously asking, “How many scoops of coffee do you put in the filter basket? The directions on mine say to put a scoop per cup. That seems like a lot of freaking coffee.“

They’re up to 272 replies in less than two hours. That’s roughly 2.6 replies per minute. I guess the good folks over at FARK take their coffee pretty seriously.

On the upside, there have been some very entertaining posts scattered among the trolls (“I have the servants force feed coffee beans to a Indonesian civet cat- who, in turn, relieves itself over the expresso machine.”) and coffee nuts (“I use 25g per 500ml of water in my French Press.” and “Seriously, if this is too difficult for you maybe teabags are the way to go.”), such as this expertly-drawn diagram: 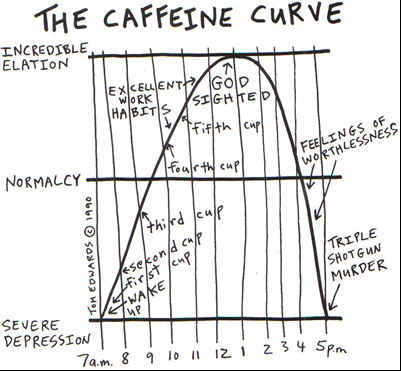 How do you take your coffee? Me, I’ll take pretty much whatever you hand me as long as it’s not decaf, although I am partial to my French press over a drip machine any day…

Looking for an ice-cold beverage to quench your thirst on a hot, January day in Houston?

For the record, this is the newest offering from Anheuser-Busch: Chelada. It’s the latest mass-market attempt at cerveza preparada or Michelada (a.k.a. “red beer”), the rather disgusting recipe for which can be found here.

Here’s a hilarious sampling of recent reviews from the awesome BeerAdvocate:

And they just get worse.

Hey, maybe this well sell like crazy in the Hispanic market. But somehow I think the AB product development team might have been, as one reviewer on BeerAdvocate said, “… hammered on tequila already…” when coming up with Chelada.