Enough posting links to and pictures of other peoples’ brilliant work in lieu of my own mediocre and haphazard creations.  I’m finally going to write about something I actually did for a change.

I’ve been putting off posting this for a while, not because it was a disaster, but because the photographs themselves are absolutely hideous.  I couldn’t get the light right, I couldn’t get the camera to focus and I was rushed because the people I was serving the meal to actually wanted to eat it, instead of sitting around and watching me take pictures of their food while it grew cold.  Stupid, impatient people.  Heh.

So, just keep in mind that while the photographs make the food look as if it was reconstituted out of some awful 1970s-era Baptist Ladies’ Fellowship cookbook, the food itself was really quite good.

Before I discuss the ingredients, I’d like to talk a little bit about where I found this recipe.  My friend Sarah gave me the new Rocco DiSpirito cookbook recently.  Aside from the undeniable eye-candy on the front cover: 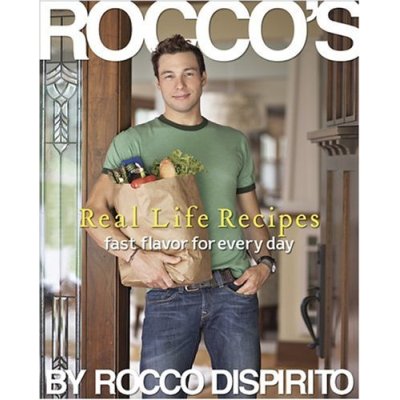 …there are also some fantastic-sounding recipes inside (Beef with Crispy Potatoes and Blue Cheese; Goat Cheese Ravioli; Fried Scallops with Melted Onions; just to name a few).

But the book itself is weird.  I’m educated-guessing that to replace the television income that has been depleted by his widely-publicized legal battle with his estranged produced/friend Jeffery Chodorow, he’s entered into a partnership with one or more food companies to promote their food in this cookbook.

The result is a bizarre mixture of polished yet accessible recipes (good!) with recurring calls for such random yet specific ingredients as “Amore® garlic paste” and “Victoria® Fra Diavolo sauce” or “Dole® classic Romaine lettuce” (bad!).  I mean, we’re getting down to brands of lettuce here?  Really?

The entire thing leaves a bad taste in my mouth.  These aren’t even things that real chefs cook with.  Canned okra?  Hellman’s® Dijonaise?  Real chefs aren’t sending their staff out with directions to the nearest Sam’s Club, all: “If you don’t return with 80 cans of Green Giant® creamed corn, you can kiss your ass good-bye!”  It’s a scam and it irritates the hell out of me.

If I wanted to cook with a specific list of pre-made, preservative-laden, name-brand ingredients, I’d rip the paper off the back of a can of Campbell’s Cream of Mushroom soup.  It’s just not a very tasteful or professional way to write a cookbook and I find myself — yet again — disappointed with our boy wonder, whom I want so desperately to like.

All that said, I enjoyed the sound of Rocco’s recipe for porkchops with a mustard/cherry tomato sauce and decided to tweak it for my own tastes.  It’s quick, easy to make, and is a real crowd-pleaser, which is why I love it.  Finally…here is the recipe (brand names left out for everyone’s benefit): END_OF_DOCUMENT_TOKEN_TO_BE_REPLACED

Anyway, like I was saying…  If you’re like me, then you’ve also probably wistfully wondered what the Battle of Helm’s Deep would look like if painstakingly recreated with Gummy Bears, Sour Patch Kids and licorice ropes.  Well, wonder no more. 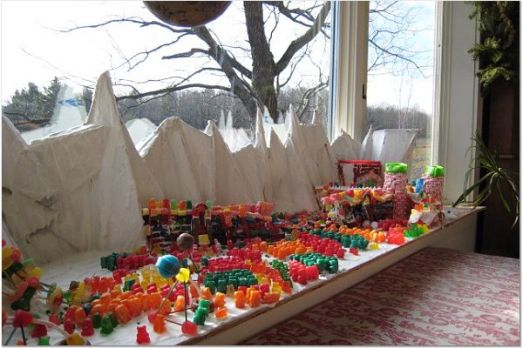 This glorious masterpiece of sugar and orcs was created by the boys over at Miss(ed) Manners. You must go and read their write-up of the process and ingredients behind their recreation, complete with detailed pictures and hilarious captions. 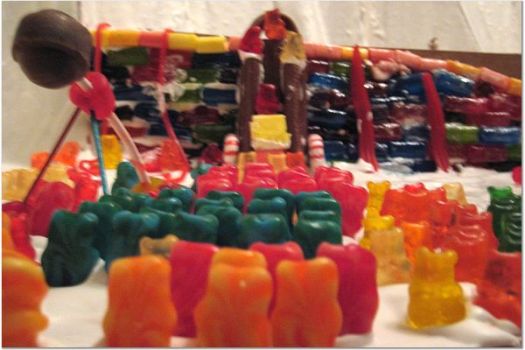 It’s a trebuchet made out of a Tootsie Pop, people. Pure brilliance.

And — if after you’ve taken in the grand sight of Gummy Bear Uruk-Hai being pwnt by a Sour Patch Kid Gandalf and an army of Sour Patch Kids Rohirrim on gummy horse steeds obliterating Gummy Bear orcs*** — you’re still craving more sugary Tolkien goodness, then look no further than this:

The Battle of Pelennor Fields and the Siege of Minas Tirith! 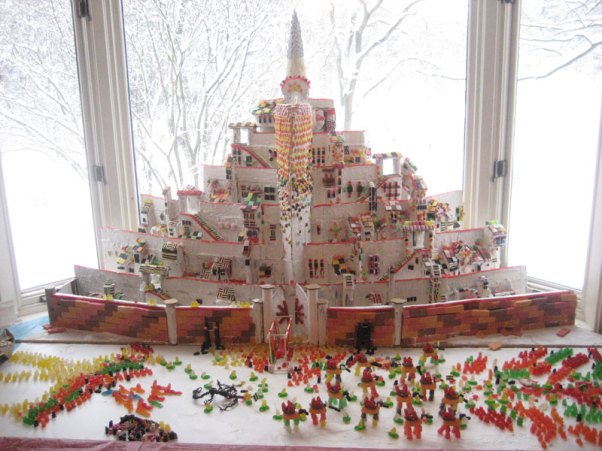 Holy mother of God. This has got to be the coolest thing I have ever seen. Also: I am such a dork.

This elaborate setup appears to have taken much longer to create and uses many more ingredients. Take, for example, the Lord of the Nazgul and his Fell-Beast made from black licorice ropes and a fully-functioning Grond (the battering ram) reimagined with red licorice ropes and peppermint candies: 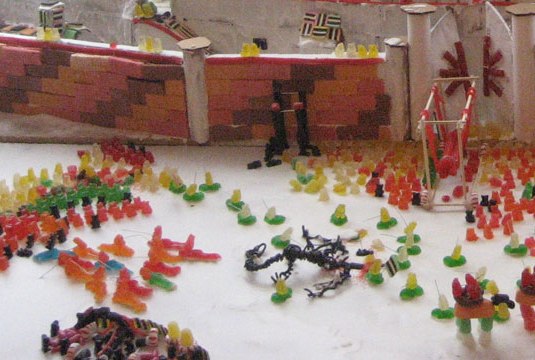 I mean, this is art, people.  If you look closely, you can even see tiny drops of blood where the Lord of the Nazgul has just killed Theoden and, per the boys at Miss(ed) Manners, “…beaten the sweet out of Merry and Eowyn.”

One can only imagine what depths they will plumb for next year’s Christmas project.  Minas Tirith, being the hardest battle to effectively recreate, leads me to ponder whether or not they peaked too early.  Perhaps next year will be a series of vignettes — the Council of Elrond, the ridiculous and hated Entmoot, the aftermath of the destruction of Isengard — or maybe a faithful recreation of The Shire and all their lovely little gardens and pubs.  Your guess is as good as mine…

***If you understood at least 75% of this without having to reference Wikipedia or any other source, then there’s a strong chance that we could be in love, or at least lifelong friends.

And massive props are due to Food Goat for pointing out the link in the first place.