When Richard and I moved into our townhome last May, we knew that the first job to be tackled would have to be the kitchen.  I can live with a dingy, outdated master bath or overgrown patio for a while.  But I cannot live without a fully-functioning kitchen.

The townhome itself was built in 1968, a year during a time period that my mother fondly refers to as “the era that taste forgot.”  Despite that, the townhome is very solidly-constructed and has good flow.  But it also had all the original appliances, cabinets, flooring, paint — you name it, it was original to the house.  And it was awful.

We knew this going in, which is part of the reason we bought the townhome in the first place.  There is absolutely nothing wrong with the home, structurally-speaking.  But prospective buyers were simply unable to get past all of the cosmetic flaws and grime, which had added up to a very low asking price for the area.  Being handy and being totally able to see past the broken cabinets and stained carpets (for example, the previous owner had chewed tobacco and didn’t use a spitter; translation: he spat his tobacco juice DIRECTLY ONTO the carpet, which stained both the carpet and the carpet pad and is probably the nastiest thing I’ve ever encountered), we jumped on it.

Because we were so eager to get started on the kitchen remodel, we completely forgot to take pictures of it in its “before” state.  However, thanks to the magic of HAR.com‘s photo galleries, I was able to dig up some pictures of a similar kitchen in a townhome down the street from us.  Take a gander: 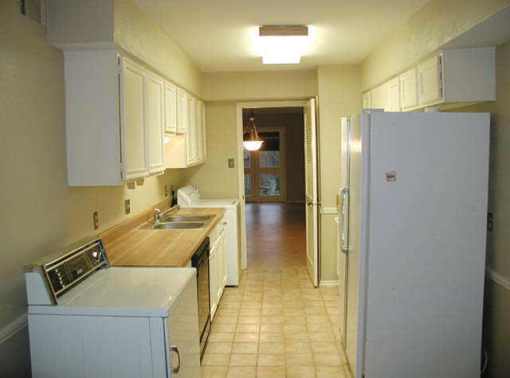 Note the linoleum. Our was a greenish color, and when we started peeling it back to remove it, we actually found another layer of flowery linoleum beneath. I guess not everything was original.

Also note the cabinets. While this kitchen’s cabinets appear to be in decent condition, ours were hanging limply from their hinges and were broken and busted in places.

Lastly, please note the countertops. Again, these are in much better condition than ours. The genius who owned our house before had painted over the laminate countertops with some kind of textured paint. Textured. Paint. It was stained and scratched and gummy and impossible to clean and altogether totally disgusting.

Our appliances were also original, except for the refrigerator. The stove/oven no longer worked at all, nor did the dishwasher. The fridge was only a year old, but was coated inside and out with some kind of mysterious, viscous tar-like substance.  And the owner elected to take his ancient washer and dryer with him, thank God. 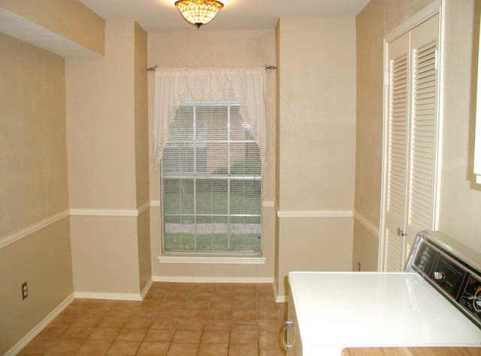 This is the breakfast area off the kitchen. Note the lovely color on the walls. Our kitchen was white; no color whatsoever. But the white walls had been stained yellow by years of cooking and grime and God only knows what else.

There was also no light fixture in the breakfast area.  There was a ceiling fan.  I mean, I know that Texans love their ceiling fans, but in a kitchen?  What the hell?

I would also like to take this opportunity to mention the colonies of roaches that began emerging from the cabinets and nether regions of the appliances once we started the demo work.  Boric acid mixed with cornmeal is your best friend in situations like this.

Pictures of the new kitchen and a short description of the entire process after the jump.

This is the new kitchen: 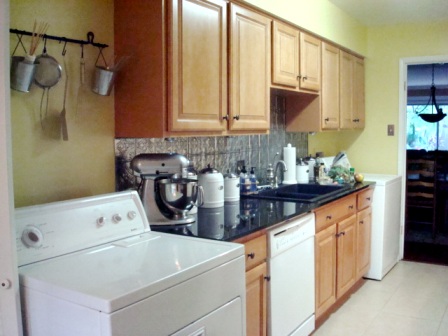 The walls are yellow now, but from paint and not layers of grease.  The paint itself is a weird color, almost a pear shade, and seems to change depending on the light.  I like it.

Painting was the first thing that we did.  There was a lot of painful taping off of areas, which is excruciatingly time-consuming and meticulous.  But the results are well worth it.  Anyone paying someone else to paint a room for them is throwing money away.  Sorry, but it’s true.  There’s your first DIY tip in a nutshell.

The second major thing that we did was to get the linoleum out and put some good tile down, as you can see below.  This is now how I would have preferred the tile to go in, pattern-wise.  But our contractor put it bluntly: you can do a 45 degree angle layout and be trendy, or you can lay them out normally and use a lot less tile and a lot less labor, thereby saving you lots of money.  We chose the latter option, obviously.

Now, you might be asking: why, if you’re on a budget, did you pay someone to lay down tile for you?  These are the main reasons why:

And there’s a lot to be said for finding a really good contractor.  Our guy, Edgar, is very straight with us.  He doesn’t like to waste anyone’s money or time.  He’ll tell you exactly what can and can’t be done and he’ll totally work with any budgetary constraints you have.

If you can’t find a good contractor through friends’ recommendations, try a website like Do My Stuff, where you can find all manner of service or construction people, all of whom are rated in an eBay style system by previous clients. 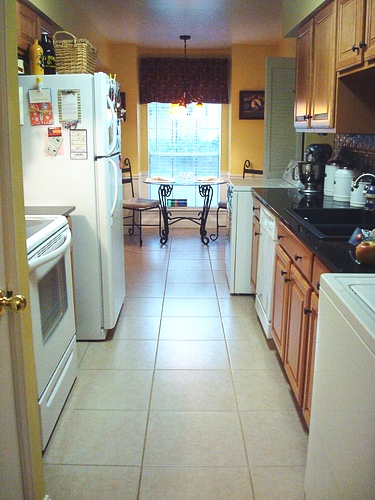 As you can tell, the washer and dryer had to remain in the kitchen.  There simply wasn’t anywhere else to move them without totally replumbing our house, which was not in the budget.  We had to work with them.

And since it’s really hard to find stainless steel washers and dryers without spending a paycheck or two, we decided to go with all white appliances to match the white W/D set.  For now, at least…

Here’s where it gets cool: my stepfather recommended a scratch-and-dent place outside the city limits that sounded dubious at best (they operated out of a mobile home…), but we checked it out anyway.  Keep your options open, folks!  And it turned out they had amazing bargains for stuff that truly did have only one minor scratch or dent.  No. Big. Deal.

Even better?  They love to haggle.  Me too!  So I bargained my way into getting the matching brand-new Kenmore high-capacity W/D set and the also-brand-new Kenmore dishwasher — all three items! — for $750, including a two-year warranty and free delivery and installation.  Six months later, they’re all still awesome.  And they even hauled the old, non-functioning dishwasher away for us.

I feel like I should have gotten some sort of bargaining trophy for that.  Like a bowling trophy, but with a little woman holding a wad of cash instead.  The washer alone would have cost at least $600 in the store, not including warranty and delivery/installation.  Moral of the story: definitely peruse any scratch-and-dents in your area the next time you need an appliance.

Hey!  There’s dinner on the counter!

Next money- and time-saving plan?  Keep the existing cabinets and just have them refaced.  We saved $1,000 on this alone.  The cabinets were already in a good configuration and made of solid wood.  Why spend all that extra money to rip out good cabinets?

We had the contractor remove all the doors and rehang beautiful new maple doors with new hardware in their place.  He also refinished the outside cabinet facings with matching maple strips.  The insides of the cabinets were still painted white, though, so we found a paint color that matched the wood and spent a Saturday painting the insides of the cabinets to match, and then installing those lovely peel ‘n’ stick cabinet liners.

We demo’d the countertops ourselves because we hated them so much and because it saved us $300.  Taking a few old pieces of laminate countertop to the dump is much more manageable than taking appliances or a dumpster full of linoleum (which was also in our downstairs bath and foyer).

The contractor installed granite countertops which only cost $1,000 with installation and sealing.  We got a good price because we chose a basic color and went with a basic edge finish.  I would have loved to get a really dramatic color and a fancy bullnose edge, but those things would be out of place in a townhome like this, in addition to being unnecessarily expensive.

We also chose a black granite sink to match the countertops.  This was our one splurge, but I’m hard on my sink and I use a lot of heavy and ungainly things to cook with (gigantic Dutch ovens, for one).   I needed something that would resist scratches and had a large capacity.  This sink fit the bill.

Another bonus was that it perfectly matched the granite countertops, making the already small counter look much larger than it really is since there’s no interruption of color.  Also, the sink is only 80% granite, so it won’t break delicate glasses or china and it doesn’t ever need sealing. 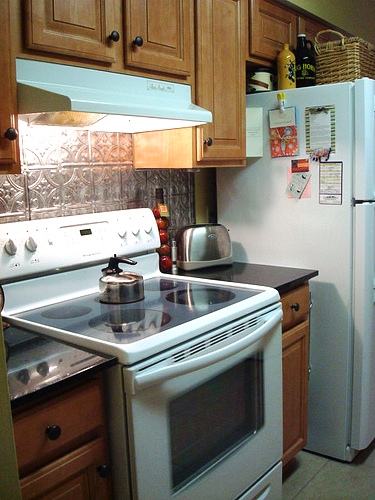 Last but not least was the oven and the pressed tin backsplash.

I had to compromise on the oven, as we aren’t allowed to run gas lines into the townhome.  So it had to be electric.  But — by God! — it was not going to have coils.  I chose a ceramic top with five burners and a convection oven.  Since gas stoves are all the rage now, it doesn’t matter how many frills you get on your electric stove: it’s still an electric stove and is, therefore, nice and cheap.  We got this one brand-new, after scouring at least ten different places looking for a good deal.

And then there’s the backsplash…

We did this one ourselves and…it sucked.  It took three solid days of work, cutting the tin pieces to fit and arduously matching them up before fastening them to the walls.  We chose the pressed tin because we wanted something different but not pricey (glass tiles were the first option, but were too expensive in both materials and labor costs) and something that we could install ourselves.

We only needed eleven sheets of tin, so that kept costs down considerably.  But I will probably never tackle a project like this again.  Even with tin snips, it’s incredibly difficult to cut the tin.  You end up cutting yourself much more frequently, both with the snips and the tin itself.  And matching up the pieces takes a lot of preplanning and verrrrrry careful cutting.  However, you certainly learn the value of teamwork in a young marriage and that has to count for something, right?

Overall, we kept the kitchen costs to a minimum (no, I’m not going to tell you the exact number…) and the entire project only took about four weekends, but there are definitely valuable lessons that we learned along the way to keep costs even lower next time.  And there will be a next time.  Just…not for at least a few years, hopefully.

9 thoughts on “Kitchen Remodel On A Strict Budget: It Can Be Done!”