I finally got around to writing up Blue Nile after eating there two weeks ago with some fellow Chowhounds. Sure, I’ve eaten there before — I’ve even written about it here at she eats. — but I decided to give it the Houstonist treatment and, hopefully, introduce a wider audience to the gustatory pleasures of Ethiopian food.

Caveat: that’s not a picture of the actual food at Blue Nile. My camera was on the fritz that day (quelle shock, I know!) and I managed to find a photo on Flickr that looked very close to Blue Nile’s food. Thank you, Creative Commons license!

If you’d like to see some pictures from that afternoon and some pictures of the food we actually ate, head over to Food In Houston, where anonymouseater graciously put up a slide show of our meal.

If any takers want to hit up Blue Nile with me one of these afternoons, let me know. It’s pretty close to my office and I’m feeling the doro wot urge once again…

The weeks keep passing so quickly these days! I can’t believe it’s already Thursday and already time for the answers to Tuesday Trivia. With no further adieu…

Although she and The Grumpy Chef were tied for first place, the tie-breaker was their answer to queston number three.  The Grumpy Chef ventured “Persian,” while Pooh! couldn’t make up her mind and offered both Greece and Rome.  These two are neck and neck each week, I tell ya.  One day we’ll just have to play Final Jeopardy to see who reigns supreme.

Well, well, well.  Someone swooped in late this time and got Every.  Single.  Answer.  Correct.  Who, you ask?  The answer, after the answers:

Deciding the winner this time was extremely difficult, and let’s discuss why.

The Grumpy Chef came in fast and strong, beating everyone else to the punch with his answers.  However, his answers to numbers 5 and 6 used “aioli” in place of “mayonnaise.”  Now, knowing that The Grumpy Chef is European (although he, like my husband, would probably argue that he is “English” and not “European”), I understand his tendency to use “aioli” instead of “mayonnaise.”  It’s very common across the pond to use those two words interchangably.

However…  Aioli and mayonnaise aren’t quite the same thing.  Traditional aioli is made without egg yolks, and uses garlic as the emulsifying agent instead.  I know, I know — I’m nitpicking, especially for a contest where the prize is NOTHING.

That said, I have awarded the prize for this week’s contest to Pooh! and her late, but correct, answers.  And a very honorable mention goes to my adored Grumpy Chef (seriously, if chefs could have groupies, I’d be one of his).

Pooh! runs a blog with all manner of humorous observations about life, Houston and life in Houston.  Go pay her a visit!

The Grumpy Chef runs a blog called “Who Dares Cook” about being a chef in the UK.  It’s a great behind-the-scenes look at what goes on in the kitchen and what the chef really thinks of you:  “I am a Chef. A good Chef living on the edge of insanity within an Industry full of morons and aristocrats! Everyday, customers rain down on my establishment to cause chaos, mayhem and anarchy with their ill-conceived ideals of what is right in an environment like mine. Believe me, the customer ain’t always right. I also have blue eyes and a temper Satan would be proud of.”  He does not mince words.  And he is hilarious.  Go pay him a visit!

Stay tuned for the next round of Tuesday Trivia next week.  Til then, happy eating!

Not that I’d know.

Have you heard of miracle fruit?  I hadn’t until Jenny at I’m Never Full introduced the rest of the Houston Chowhounds to this arcane bit of nature.  She wrote an entry on the mysterious fruit, describing them as “trippy berries” that will “change your tastebuds for 30 mins to an hour and cause sour and bitter foods to taste sweet.”  Foodies everywhere have begun hosting events called — appropriately enough — “flavor tripping parties” to explore the tongue-altering properties of this tiny berry.  Think of it as legal shrooming…for your mouth.

The miracle fruit was first discovered by Europeans in West Africa in the 18th century, where it was noted that the local tribes picked and ate the berry — which is in the same family of tropical flowering plants that produces shea butter and star apples — before their meals.  Considering the fact that West African tribal diets consisted mainly of yams, seeds, chili paste, millet, and sorghum, I imagine that the flavor-altering properties of the miracle fruit were quite welcome for an occasional change of pace.

The miracle fruit works its magic by releasing a glycoprotein molecule (similar to a monosaccharide) called miraculin when eaten.  Those molecules bind to your tongue and alter the way that your tastebuds’ receptors react to acidic or sour foods.  As a result, sour and/or acidic foods taste sweet.  This effect lasts for up to an hour after consuming miracle fruit.

Miracle fruit isn’t a sweet in and of itself — that is, it doesn’t taste sweet — but researchers have been trying for decades to establish it as a sweetener or flavor additive in foods.  Think about it: people would no longer be dependent upon such unhealthy sweeteners as white sugar or high-fructose corn syrup.  Rates of obesity and diabetes could sharply decline as we cut those things out of our diets.  You could make lemonade or limeade with no sugar at all; eat a tart grapefruit without dousing it in honey first; or enjoy a rhubarb pie without a side of strawberry ice cream to cut the sourness of the rhubarb (well, actually, I’d still do that…I will never give up my rhubarb pie with ice cream).  All you would have to do is eat one miracle berry first.

So what’s the holdup?  Temperatures over 100° F unfortunately destroy the miraculin compound, so it can’t be used in baking or canning or any other activity involving the application of heat.  Fresh berries can be frozen or refrigerated for a few days, but don’t keep for very long.  The best method for preserving the miraculin so far has been through a powdered concentrate of the berries, but the FDA denied its approval as a food additive in the 1970s.  It’s not that the powder was unsafe, mind you; powerful corn and sugar lobbies simply prevented it from being approved as it threatened their very existence (as you can well imagine). 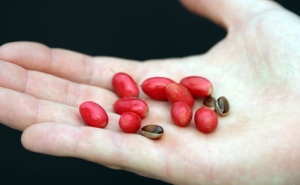 Until developers come up with a means of production available to the masses (and until lobbyists stop controlling our government, which should be right around the same time you can buy popsicles in hell), you only have a few options for trying this fascinating fruit.  You can purchase a plant and harvest its berries yourself, as Jenny did.  You can order a shipment of berries from a supplier for about $2 per berry.  Or you can attend one of the “flavor tripping” parties that have become so popular.

Houston Chowhounds will be hosting such an event in the coming months.  For more information (and to become a member of a great foodie community!), check out the group at our website:  Houston Chowhounds.  While a place and time haven’t yet been established, our order of miracle berries is on its way to our trusty head Hound.

You know you want to try them…

It’s not that I didn’t enjoy our trip to Spain.  On the contrary, I enjoyed it so much that I find myself almost at a loss for words when trying to describe our visit.  The Costa Blanca just isn’t the type of place that one can write about effectively.

How do you put into words the way the air felt and smelled, fresh with the feel of the sea but also thickly seductive with the heavy scent of orange blossoms from the endless orange groves?  Or the fact that the sun shined differently there, lighting everything with a clear blaze that never got hot?  Or the way the sea looked under an infinitely blue sky, the two of them magnifying each other and creating colors deeper than I could describe?

Let me just share some photos; after all, they say a picture is worth a thousand words.

Clockwise from top left:  (1) Branches against the beautiful sky.  (2) Sand artist on the beach at Torrevieja, with the Mediterranean behind him.  There were several other sand artists that day, all of whom would put our Galveston artists to shame.  (3) The church in the town square at Torrevieja.  (4) View down to the reservoir that provides drinking water to Benidorm and several other Costa Blanca towns.  The vantage point is from the Castell de Guadalest, an amazing 11th century Muslim-founded town high up in the mountains.

Clockwise from top left:  (1) The craggy mountains of the Costa Blanca, which looks a lot like the American Southwest in many ways.  (2) The golf course and restaurant patio of a lovely club that Dave belongs to outside of Rojales.  (3) The bell tower at Guadalest.  (4) Roses against the ruins of the castle at Guadalest.

Clockwise from top left:  (1) Dinner at Baybrook’s in Benijofar.  My unbelieveably delicious pork tenderloin medallions, pan-fried and glazed with blue cheese, served on a leek and mushroom ragout.  Not your traditional Spanish pork, but oh-so-good.  (2) Honey and almonds for sale.  (3) Gill’s haddock tower at Baybrook’s.  (4) Halal foods were available in most shops, which only makes sense this close to North Africa.

You can view the photos in their original sizes (and more photos from the trip) by going to my Flickr account.  I do need to write more about Spain, but I’m afraid that today’s schedule isn’t going to allow for that since I am quite prepared to write an entire novel on it.  I’ll have to keep it short for today, but promise to write more soon!

Have a wonderful weekend, and happy eating!

…even if he is down a couple berries now:

Want to see the extended cut?

That lobster looks awfully familiar, too.  How many celebrities in the commercial can you name?

Thanks to Sars for the original Ewan-as-tomato link.

Hope you enjoyed your weekend, folks!

P.S.  If you’re wondering about the title for some reason, listen to this and relish the man’s talent.

P.P.S.  If, after that, you’re still in the mood to take my music recommendations, buy this right now.  You’ll never look back.

she eats.
Create a free website or blog at WordPress.com.